I knew it wasn’t a good idea to leave my stable home and move in with him, but my stable home wasn’t mine. I was with family after going through some financial rough patches, but I was over not having a place of my own. As a mother, it felt like I was letting down my child.
So I did it anyway.
I was elated that my baby had his own room. I felt as though I could breathe, I had my own space again to be myself. Everything was great.
Until it wasn’t.
On top of the fact that I knew moving in with him was a knee jerk decision, I knew that something wasn’t quite right about the relationship. From the weird social interactions with my family, to severe lack of communication, to him allowing things to take place in our home without acknowledging me. It was just one thing after another that reaffirmed the dumb decision I'd made.
I didn't tell anyone about how bad it had become. How we had broken up within 5 months of living together, nor how I foolishly remained in a "situationship" with him, the remainder of the time we lived together.
For the people that don't know, a "situationship" is a friends with benefits type of ordeal. Except in our case, we still went on dates, he gave me money, attended family functions together...etc
Just dumb lol.
Each day my heart broke piece by piece. I wasn't light enough, my hair wasn't long enough, my butt wasn't fat enough, my boobs weren't big enough, but no one knew. I held down every insecurity, fear, disappointment, and shame I felt  about why he didn't like me and went about my day.
I still had to be a mom, I still had to work, I still had to go to church. No matter what, I had to keep the mask on to shield the embarrassment I felt.
At the beginning of the year, he started disappearing for weekends at a time, I knew something was up.
Then BOOM! He’s married.
He got married while we were living together. To someone else, someplace else. He had asked me to marry him about 3 times, but I refused. I don’t take marriage lightly and I knew he was NOT the one.
After that, the eviction notice came.
I was packing and moving on my birthday. Into a one bedroom, with my son. Starting over....again.
FML
Mentally, physically and emotionally exhausted, I unpacked and led everyone to believe I was all good, and they believed it, except my Grandma.
She saw right through me. I had gone to her house to hang out with her. That's my girl, like my bestfriend. Her voice reminds me of Weezy Jefferson, she has the height of a 5th grader, and she is feisty as all get out. Anyways I was hoping she'd put me up on the latest TMZ drama and we'd gossip about celebrities, or her beloved Oprah.
But instead she asked me what was wrong.
I broke down.
It was like I had held my breath for the last couple of years and I finally felt safe enough to exhale. I told her everything. That I basically broke my own heart. I allowed things to happen the way that they did, because I was running from another situation I didn't want to be in. Snotting and everything, my Grandma comforted me and kept it real.
"We have all chased behind a n*gga for one reason or another, it's going to be ok."
My Grandma is the real MVP.
I was so concerned about my embarrassment, I never made room to process my experience. I knew it would be ok, it was just surprisingly refreshing to hear her say it the way she did.
I carried the weight of feeling like a failed parent, because I'd transitioned my son from 4 different places in 2 years. I allowed my agenda to cloud my better judgement, but God!!!
The Lord knew I needed her in that moment. The talk with my Grandma allowed me to redirect my outlook. I wasn't ok, but I would be. Although the world didn't need to know my issues, I did have people I could confide in. It was like the guilt and shame had melt away.
For some reason a lot of my friends think I'm this strong person. That things may get to me, but I'm able to bounce back real quick and move on. It isn't true. Before I talk to anyone, I ball my eyes out first. Then I take a deep breath, let it go and question what I did wrong, then I give myself a pep talk. Suck it up Lena and let's go!
It doesn't always work but it does help. God will allow your trials if he will get glory out of them. Mistakes are inevitable, but it is up to us to decide whether we let it define who we are, and how we move forward.
It's ok NOT to be ok, just don't drown in it. 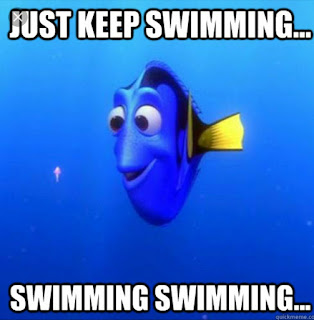